Uninterrupted was build to give fans direct access to hear and see what their favorite athletes have to say, straight from the athlete. Bleacher Report partnered with Maverick Carter to develop the look and feel for the new brand. Guided by the mantra More Than An Athlete, Uninterrupted’s content reveals a dimension of athletes often filtered out by mainstream media. The Uninterrupted platform empowers athletes to take control over their narrative, while fostering a more intimate relationship with fans. The website should be more than just a viewing platform, but a true expression of the brand voice. The biggest challenge in developing the look and feel of the brand was finding something that would balance that ethos of being raw and real while still giving it a level of minimalism and professionalism. The initial web experience was geared towards a consistent stream of video consumption and a handful of interactive content pieces. The brand identity I developed went on to be used in multiple shows and brand executions. Since it was a platform built on video we wanted to keep it simple and straight to the point with a focus on the content creators and athletes sharing content directly filmed by them. The goal was to limit the amount of separation between the fan and the athlete, and this meant a non obtrusive visual aesthetic. 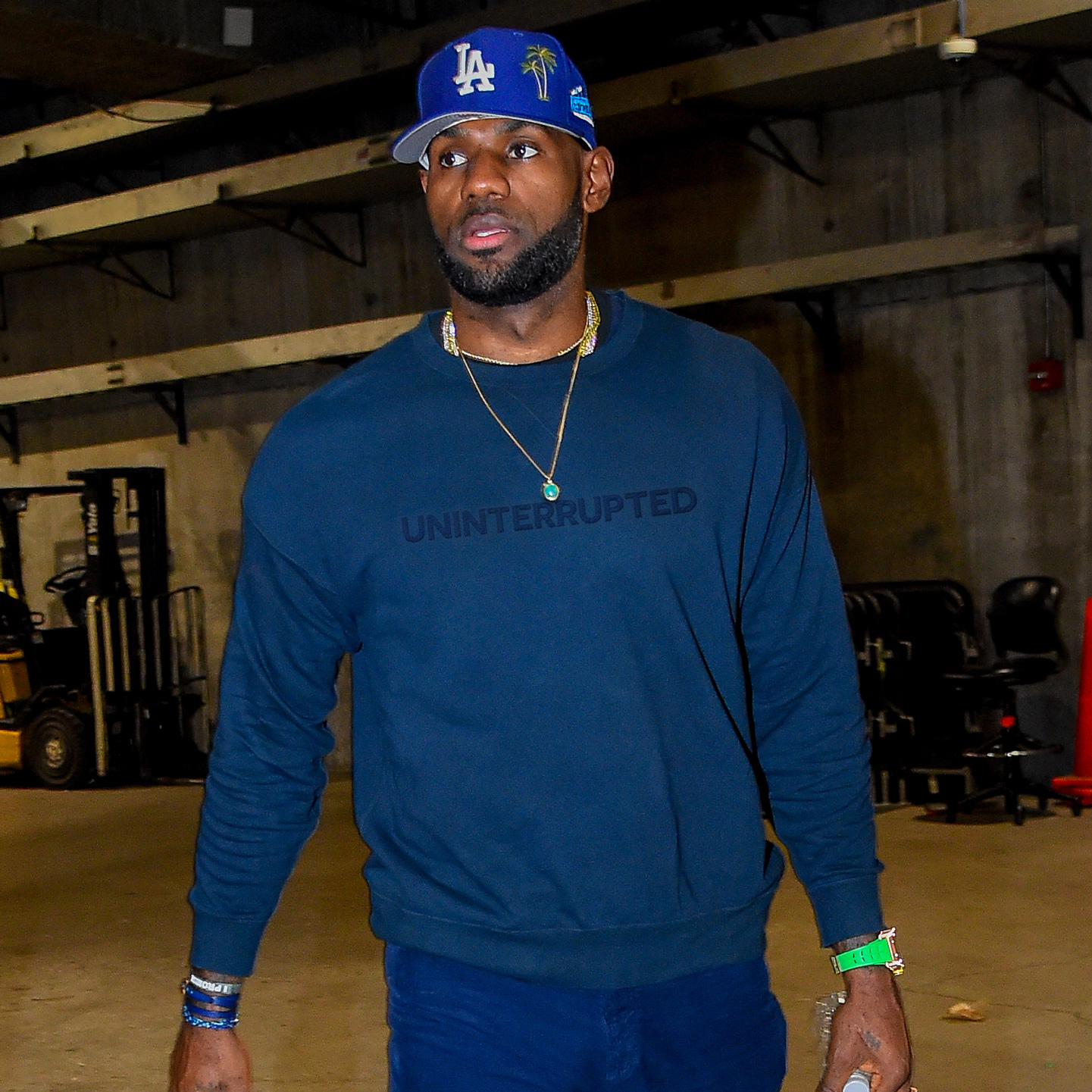 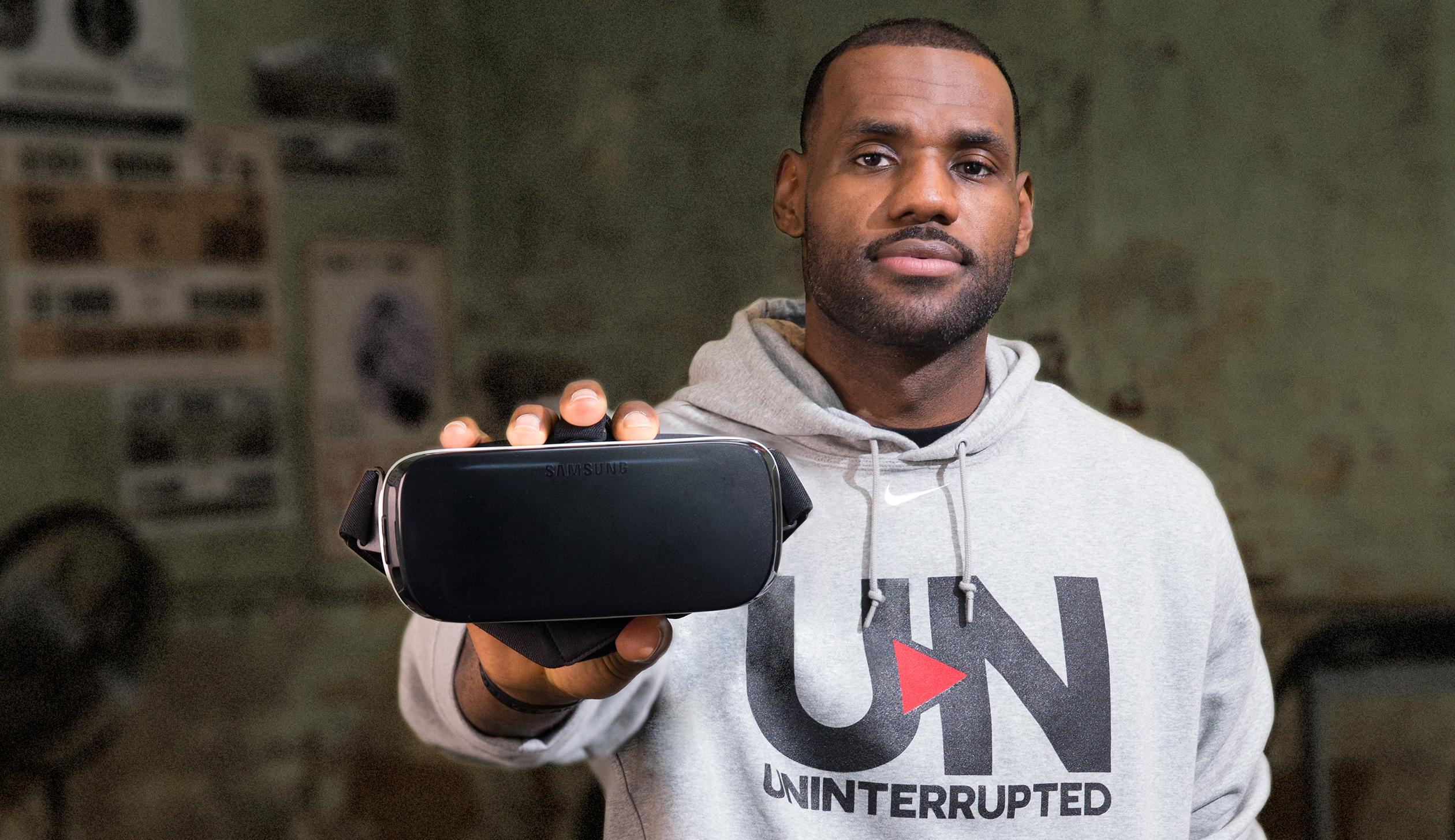 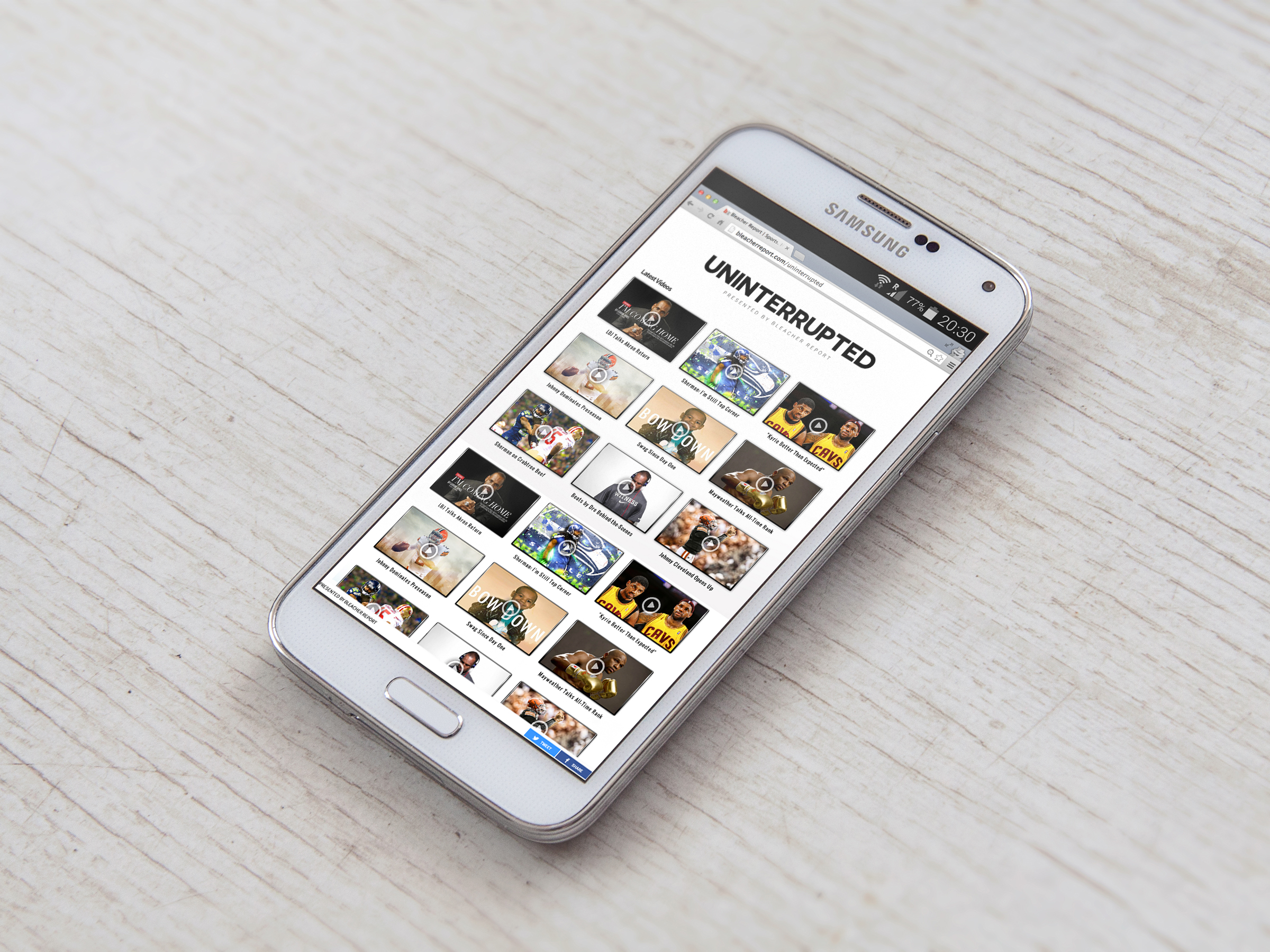 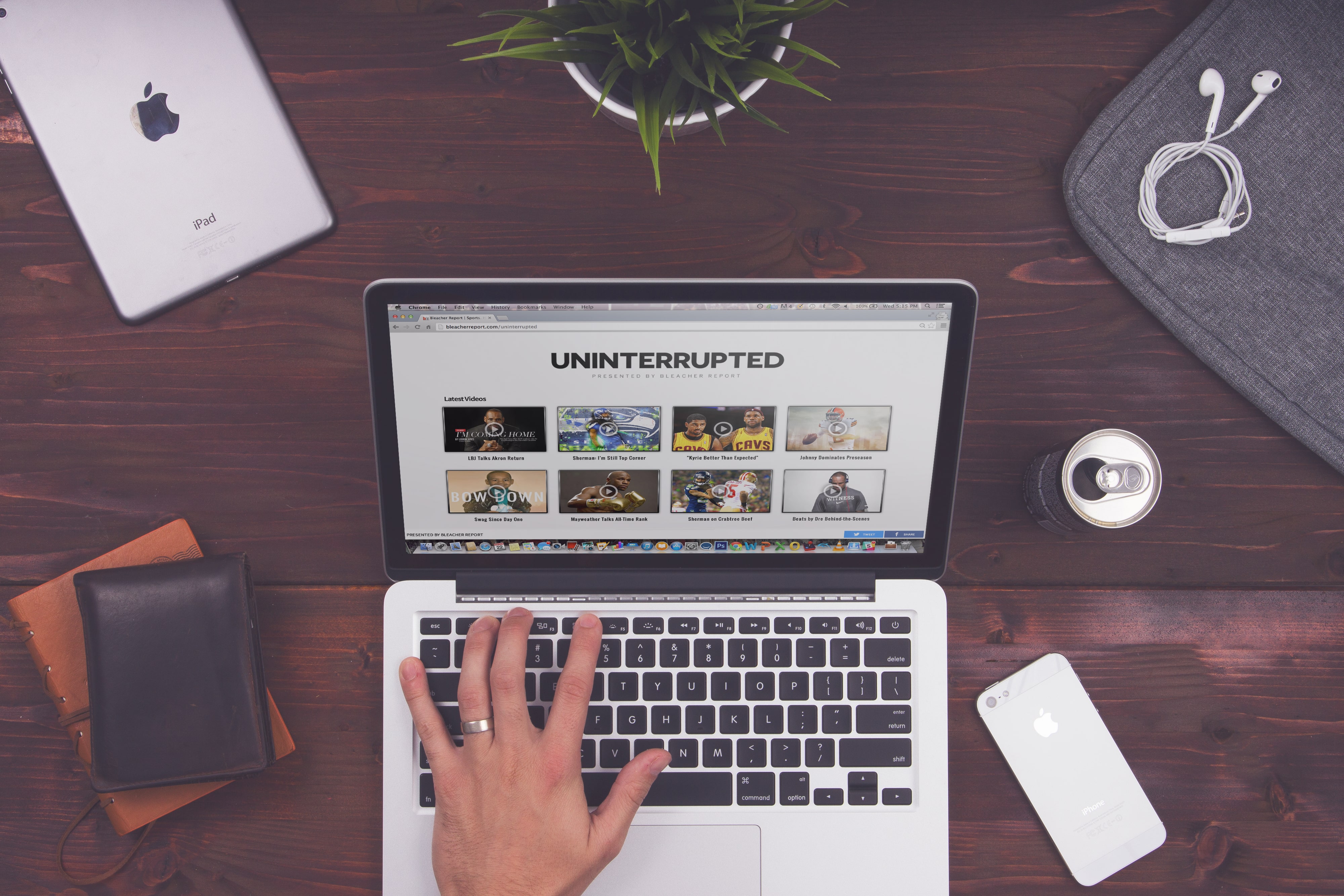 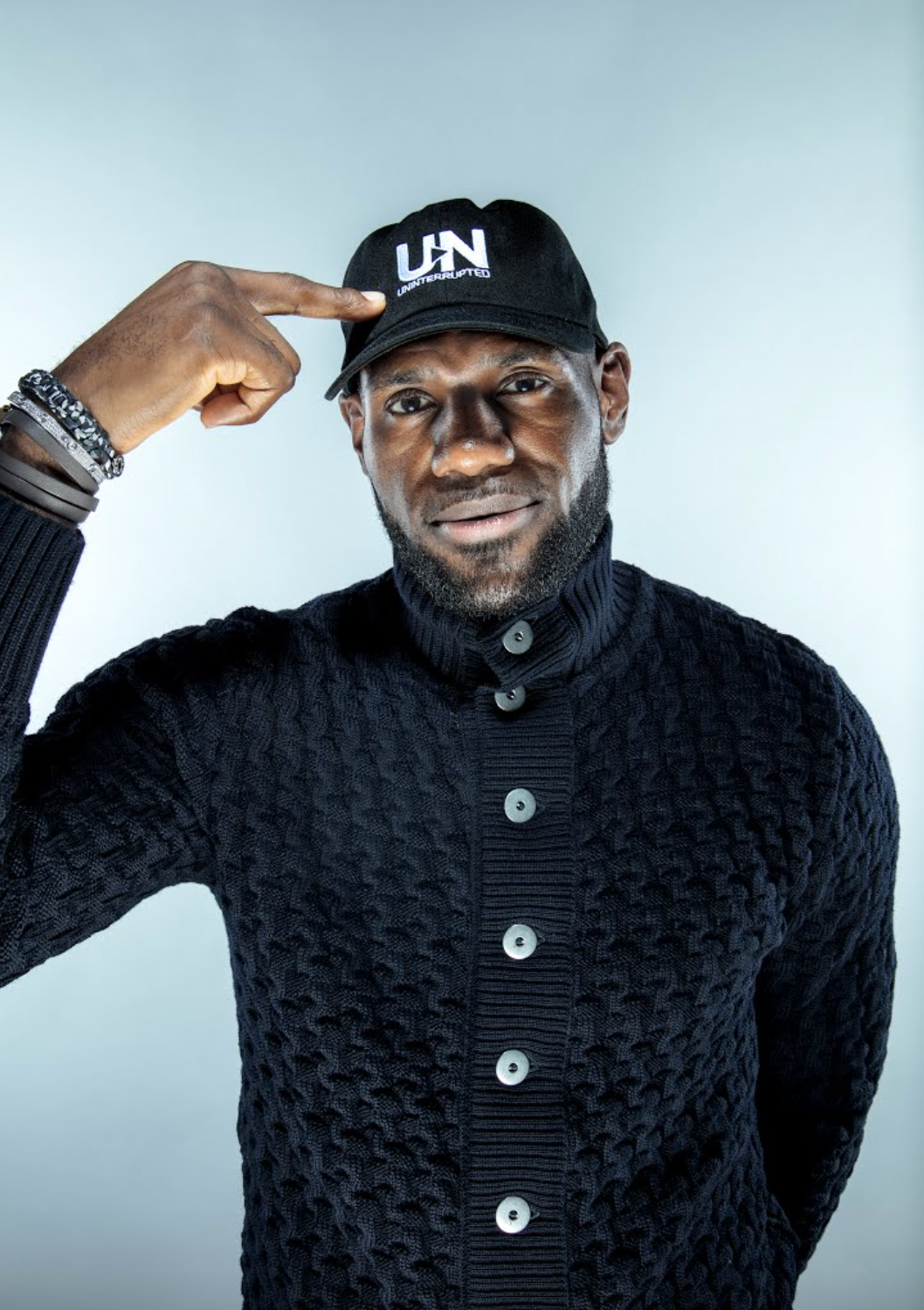 Launching the Uninterrupted brand as a part of the Bleacher Report ecosystem was a challenge which required a delicate balance of marketing and social promotion. The unique raw nature of the content, bundled with the direct to your phone mobile experience sets Uninterrupted apart from other content experiments. The mobile-first platform has made it possible for athletes to build one-to-one relationships with fans and supporters. It allows athletes the control of the length, topic and frequency of their messages, giving fans uncensored front-row access to issues, struggles and triumphs that affect players directly – no editors, no media spin.

Early on in the launch process, as Uninterrupted chose to partner with Bleacher Report to build audience and develop a platform and landing page for this content, Maverick Carter came to visit our San Francisco Office to discuss his vision for the brand. I got to sit in on this meeting and was given the directive of building options for the look and feel of the launch of the brand. This was followed by an intensive design and review process as we began the process of launching the brand.

Upon the announcement of the collaboration with Bleacher Report and it's parent companies Warner Media and Turner, LeBron James said, "The best thing about UNINTERRUPTED is there are so many creative opportunities for athletes to tell their stories. I'm excited to be partnering with important, innovative companies like Warner Brothers and Turner to keep building UNINTERRUPTED as a place for athletes to go to connect with fans and share their stories in a different way." LeBron and his team wanted a no frills easy to use design that would limit the barriers between athletes and their fans, and the partnership with us as a way to boost their initial design and infrastructure made sense on many levels.

The design process involved many rounds of feedback back and forth with the Uninterrupted team and Bleacher Report as we found a good middle ground to express the voice of the platform and stripped it of the usual superfluous factors that you would often find on media sites. The overarching goal was to retain the spirit and voice of the athlete, and the branding had to reflect that as well as the site UI and experience. Knowing that the main goal was to provide a flexible brand vision that would be paired with intimate and personal storytelling from athletes informed all of the iterative steps before we landed on a color palette, logo, video broadcast package, and website design.

Furthermore, one of the more important aspects of developing the layout and design for Uninterrupted as a platform was to allow ease of use both on desktop where you could full immerse yourself in these videos, but also allow for quick mobile consumption as well. I wanted to work on something that would be smooth and functional and responsive as it was used in different scenarios. At the time of launch upward of 75% of Bleacher Reports audience was primarily consuming our content on mobile, and captitalizing on this data we wanted to make sure that any content that we developed in partnership with LeBron and Uninterrupted would be consumed efficiently and quickly on a user centric mobile platform.

Initial explorations were more organic and hand drawn as we leaned into a script style which would speak to the personal aspect of the initiative. However as we spoke through the different iterations, we decided to go for a cleaner look that stripped away the extra fluff and focused on a minimal and clean look that would put the focus on the video content. The key was to put as few barriers between the consumer and the athlete and make the connection as direct as possible. In developing the logo and branding, it had to work from a web perspective, but also from an apparel standpoint and from what would traditionally be considered a broadcast package.

The hub page for the video was designed to limit distractions and was stripped of links out to other Bleacher Report content. We simplified the design to break down categories by the athlete as it was initially limited to a select few. As the brand continued to grow this would lead to a more refined look for the website but the branding would stay consistent throughout. Opting for a clean Sans Serif logo that articulated that Uninterrupted was a platform rather than a media company. The goal of the logo was to be unubtrusive yet still clean enough to serve as a vessel for multiple voices.

For the launch of the platform, we had to prioritize a video package and brand identity within a condensed timeline of 6 weeks as the launch coincided with the beginning of the NBA Playoffs. LeBron who would traditionally go into his "Zero Dark 23" social media hiatus during this time, would be using the Uninterrupted platform to check in with fans, so getting the launch off the ground smoothly was of utmost importance. This would eventually evolve into the Trophies series was an exclusive inside look at the journey to the NBA finals. The partnership with Turner and Bleacher Report also allowed for amplification of this content to grow awareness for the content and brand as can be seen in the TNT promo below -

One of the first examples of all the pieces of the design, video packaging, brand guidelines, access, and sponsorship all coming together in a piece of exclusive content around a major sports trigger happened when LeBron signed his lifetime deal with Nike. It showcased the personal connection with athletes giving a peak into their lives with the branding acting as a strong signifier of a social content vehicle, while still being unobtrusive.

The following year one of the first major events that I had the opportunity to help develop as a part of the creative production team that would work on concepts for Uninterrupted was a ping pong match between Drake and Reggie Miller that was broadcast during the halftime of the 2016 NBA All Star game in Toronto. These type of creative collaborations would set the stage for an environment of inclusivity and lead to many more partnerships between creators and the brand.

The redesign followed the thought of not being just a symbol or monogram, but a complete and striking identity that could be recognized and applied anywhere as a symbol and tool for expression. The content was the hero rather than the branding and so it had to feel modern yet unobtrusive so that it could be applied in a video heavy user interface. During the design process we went through a number of iterations that were flashy and more trendy, but the continual feedback was to strip away too much of the flair that was added in an attempt to streamline things. The logo had to be versatile and going with a stripped down sans serif custom typeface that would be bold and eye catching and yet fit into any UI implementation was a key factor in the process.

The logo can be seen integrated into the Los Angeles offices of Uninterrupted in this video as Draymond Green visits Maverick Carter to get a behind the scenes tour of their content production studio. One thing that Mav made clear was that the logo and the brand style would have to feel like it could breathe and live in actual space. He wanted a physical representation of the brand that could be a vessel for different styles and storytelling methods. Similar to how the different athletes had their own backgrounds and personalities, the logo should feel like a chameleon in the sense that it can stand out on it's own, but also blend in with any of those voices.

The integration of the logo into Uninterrupted as it grew as a brand was following the same principles and guidelines. The logo and branding were meant to be an element that could easily blend into the background as the storytelling took focus. The principles of leadership, charisma, and identity taking center stage as the personalized content blurred the lines between athlete and consumer.

Working on the launch of the Uninterrupted brand while developing the look and feel of the design package was a fulfilling experience that allowed me to better understand the nuances of brand development and marketing. Understanding the core user base and product as best we could and building the plane as we were flying it meant I had to work efficiently and in a nimble manner. Seeing the brand grow and thrive to become the institution it is now is extremely gratifying and it was a pleasure to be a part of the launch of the brand.