"It's insane what you guys come up with. This technology is unbelievable." - Grant Hill

Knowing that this project would be airing on national television during March Madness coverage, the goal was to make something compelling that would get people talking on social. Grant Hill is an icon for Duke Basketball, so we knew that a number of fans who fall in our targeted demographic of lifelong college basketball fans would react to the content and it would get the conversation going on social media. From a technical standpoint, using a combination of artificial intelligence based de-aging techniques, visual special effects, and makeup we were able to believably recreate Grant Hill's college appearance. Getting this to feel realistic and not an expression of uncanny valley was a difficult task in the time allotted, but we were able to produce a concise piece that ran on national television and saw a great response from it's audience. 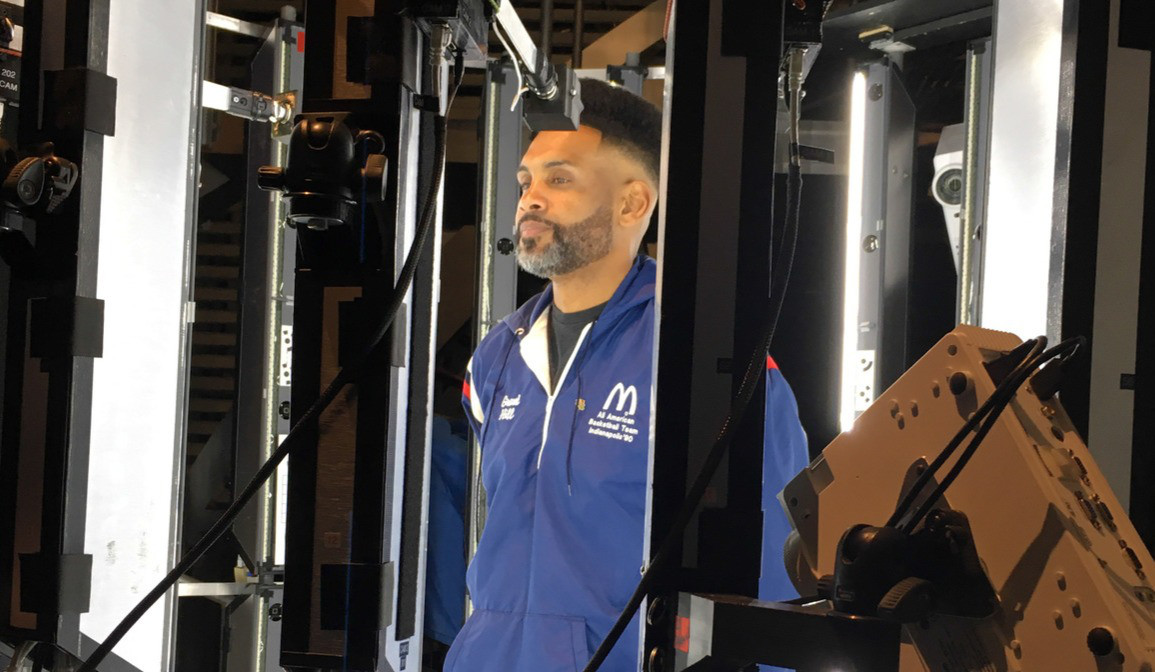 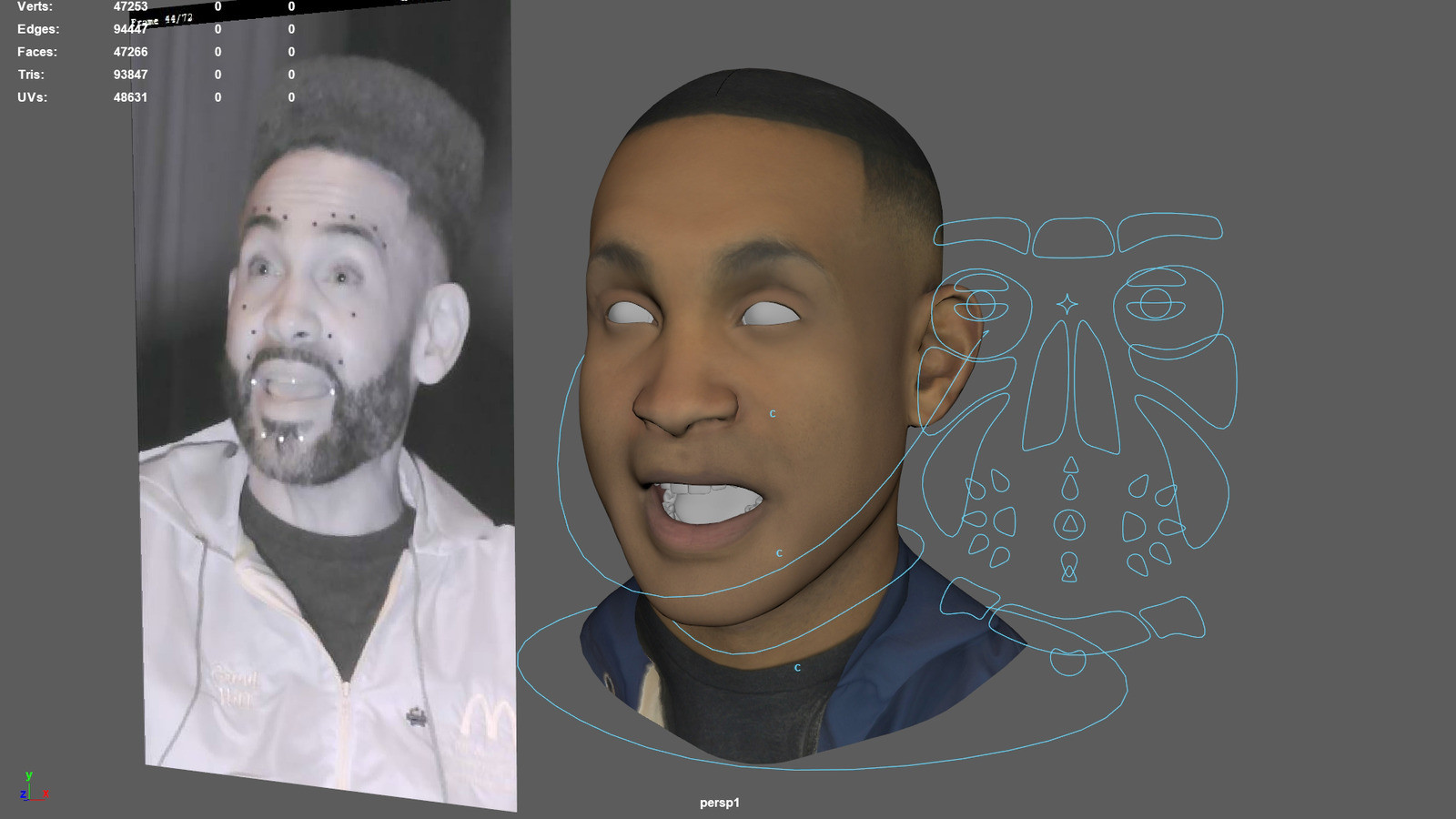 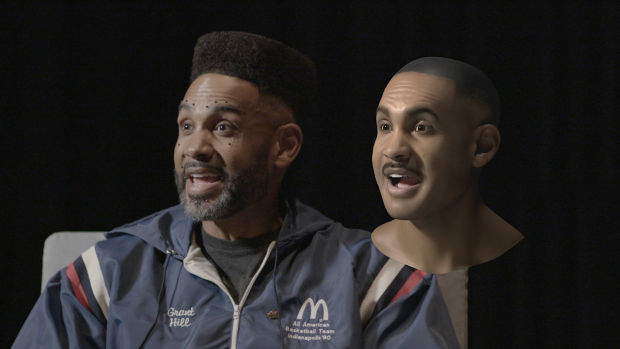 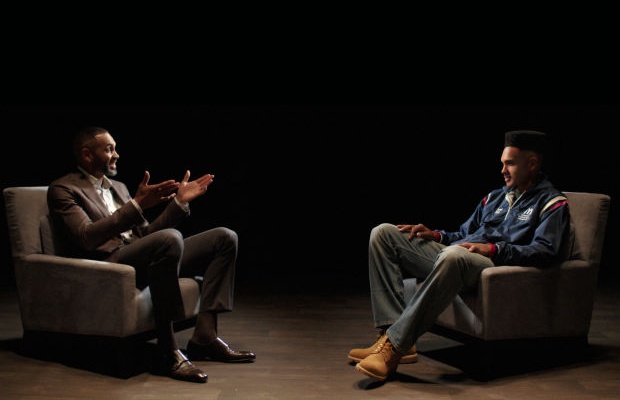 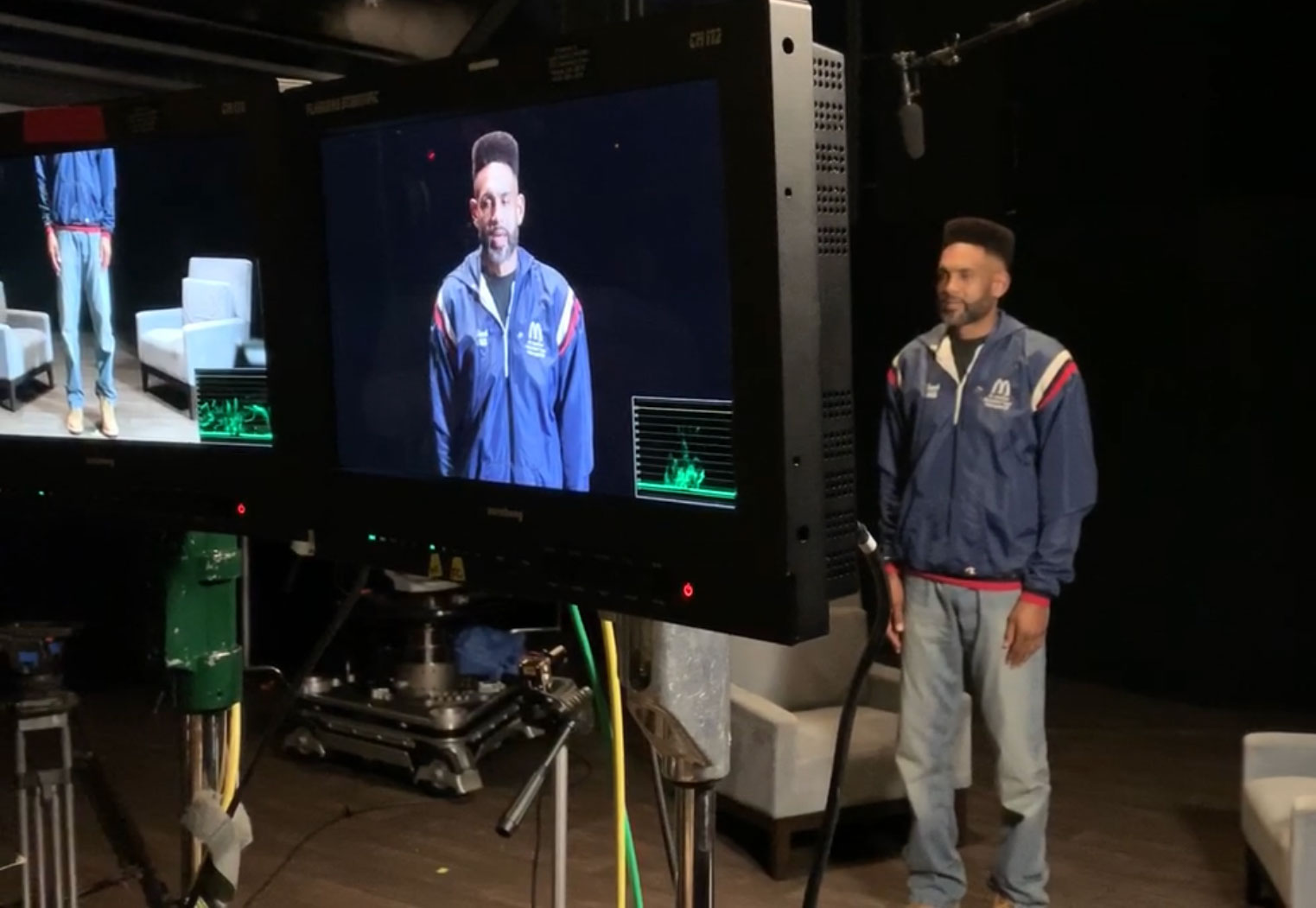 In late 2018 I was a part of a tag team duo that had an opportunity to develop a new video product for Bleacher Report. The goal was to use technology to tell a personal story using access to talent. The initial impetus to develop this idea came as Bleacher Report was looking to expand its offerings of content production to our pair ever growing access to the biggest names in the sports world. March Madness being one of the biggest triggers on our social sports calendar, we wanted to capitalize on the audience and exposure we would get to test out the response to a new content vehicle such as this Reflektor concept. The project would go on to win a Gold American Advertising Award for best special effects.

Working in conjunction with my coworker at the time, Dan Worthington, we organized and planned this project. The concept began with a heavy research and development phase as we explored various methodologies to implement such an idea. The original seed for this concept came from a larger pitch called "Bag to the Future" which was an Augmented Reality time capsule that allowed athletes to delve into their past lives through the storytelling vehicle of a backpack filled with items from their childhood.

Part of this execution included an interview with your younger self. I reached out to a number of different artificial intelligence companies as I looked to explore the deep fake route, as well as options which looked at volumetric video capture. Eventually we landed on Method Studios, the VFX company that was behind the effects for films such as Black Panther and the Avengers to help collaborate on the final execution for this.

Dan and I tag teamed the research stages so that we could fully understand from a tech perspective how to properly pull something like this off as it would be a difficult technical undertaking and we wanted to make sure we could execute what we had promised.

As can be seen in the behind the scenes video above, the full day shoot consisted of everything from coordinating hair and makeup for Grant, prepping a shoot schedule, setting up lighting and the set, working with the camera operations crew at Turner Broadcasting to shoot multiple angles, and then setting up the 360 degree facial scanner to get a 3 Dimensional scan of Grant's face.

This face would then be applied using motion tracking to Grant's real face in post production. In order to pull this off we had to have a separate camera recording motion tracking dots on Grant's face to set up the most accurate facial structure and emotions to make the video as realistic as possible. As you can see in the rough cut I pulled from when I was early in the editing process the footage we were working with as we were building the piece before the VFX had been applied simply included Grant in costume with the facial tracking dots applied to his face clearly visible.

From a talent standpoint, Grant was a pleasure to work with. We worked closely with him to develop a "retro" costume that would match the period of the early 90's that the piece required. One of the integral pieces we worked into the production was the inclusion of his old McDonald's All American jacket that his mother provided for us to use.

Grant was enthusiastic and took direction extremely well. I had the opportunity to run lines with him as well as work with him to give him background for the piece. As a producer for this project he was thrilled to go into makeup as well. We worked with a talented makeup artist who was able to use a wig and spray based hair makeup to give him a realistic flat top fade reminiscent of his younger days. Grant was so thrilled with the results that he even wore the wig to a costume party a few weeks later.

While writing the script Dan and myself had to keep a keen eye on easter eggs and references and coordinate the entire shoot. This entire concept lies at the intersection of great storytelling and the utilization of modern technology. My main goal was to weave the iconic moments of Grant's career in a cohesive manner while giving users a chance to thing about the question of "what if" which has been a recurring theme throughout my work at Bleacher Report.

During my time on the Media Lab team at Bleacher Report I had a chance to work as the designer, programmer, and producer on a set of stories such as "What if LeBron James Never left Cleveland" and "What if Andrew Luck was drafted in 2011." The overall storytelling and outline for projects such as these set the stage for a much larger project such as Reflektor. This really hammered home an editorial instinct in me to truly delve deep into your research as it allows for a more in depth opportunity at storytelling. The more information you are armed with the more you can shine a spotlight onto, and this pushed me to pour through countless interviews and old videos of Grant to find tidbits and easter eggs that would add a more authentic feeling to this project.

Reflektor was a project that required a number of skills throughout the publishing and production process. Whether it was directing the camera crew along with Peter Siaggas of Spots Films, working with Dan to write a tight script while working with Grant to discuss what he would like to highlight from his career. Furthermore there was a heavy aspect of art direction and design work in collaboration with Method Studios as we developed a look and feel for the piece.

I worked on the glitch based look of the transitions and the typography and also did a lot of early editing work to develop a cohesive storyline that fit within our special effects budget. We made the decision to integrate highlights as an added way to make the piece feel more dynamic as well, so that fans could take a visual journey through Grant's memories as he reminisced with his younger self. Creating a cohesive piece that fit within broadcast restrictions and felt like it told a compelling story was the biggest challenge I was faced with. Upon premiering we saw some great feedback and responses from the audience along with an appetite to do with with different athletes, entertainers, and celebrities.

Our brand marketing team was able to take our Reflektor concept to market and was able to secure a sponsored content deal with Fila to do an execution against the release of his classic GH2 sneakers in an animated piece called "Time Warp" that touched on the same themes are reflektor and drove revenue towards the content side of the company. Reflektor was essentially able to act as a pilot project for a proof of concept that could be scaled for brands. The turnkey version of this featured an animated flashback to Grant's younger days with a similar overarching theme of nostalgia.

The opportunity to be both a producer and art director on this project gave me a number of valuable skills that I continue to carry to this day. From a technical standpoint, both in the research phase and in the execution of this project, a number of techniques were harnessed to get it to its final form. Initial experiments used began in using artificial intelligence to create deep fake technology to de-age Grant ultimately ended up feeling too crude. From here when we were able to land on a combination of facial tracking and special effects that would best produce the look that we desired. These learnings in AI based image treatment and VFX informed much of the future work and collaborations that I would undertake as a part of our innovation team.

Another project that came about from this same string of "What if" style hypothetical projects was this series called "Beyond Reality" featuring Steph Curry's career if he had been drafted by the Los Angeles Clippers. This project, which was created under the umbrella of our Tactical Social Moments team, featured much of the same creative direction skills that I developed while working on Refektor. Working with Deep Sky Animation studio over the course of a month we worked on modeling, texturing, simulating, animating, tracking, rotoscoping, rendering, and compositing Stephen Curry into a Clippers jersey. We also shot live shots and did a ton of compositing working with the Frishberg Brothers, and had an amazing soundtrack composed by Mikey Navarro. I got to assist Vince Chang and Bryan Graham on the creative direction and ideation of this project which was a part of our larger tactical social initiative to experiment with "big swings" that would give our audience new types of content to consume.

These types of projects were the foundation of the type of storytelling that I helped bring more of a focus on during my time at Bleacher Report. Getting a chance to work with a great creative like Dan and an amazing Studio like Method was a pleasure. When creative minds come together you can really do some great things. One of the fundamental questions in Sports culture is what if things had gone a different way, if a trade hadn't happened or a shot had gone differently. Being able to satisfy the cravings of our fans using visual creativity and technology to develop and produce content that allowed us to explore things like this was something that our audience was genuinely grateful for. The feedback on these types of projects was overwhelmingly positive and it goes to show the power of connecting with the basic emotions that sports and content help illicit in your target demographic whether that was with a piece of content like Beyond Reality or Reflektor.