Basketball Forever has built a highly engaged global audience through fan focused content. The ethos of the company is built around the assertion that we are fans generating content for other fans. This model is loaded with authenticity. We know what our audience wants and are servicing them efficiently and effectively through social. In building a constant stream of curated content, establishing the true voice that would resonate across a broad spectrum of fans, as well as building a visual language that spoke to one of the fastest growing sports in the world became to two major challenges facing me as the creative director of the brand. 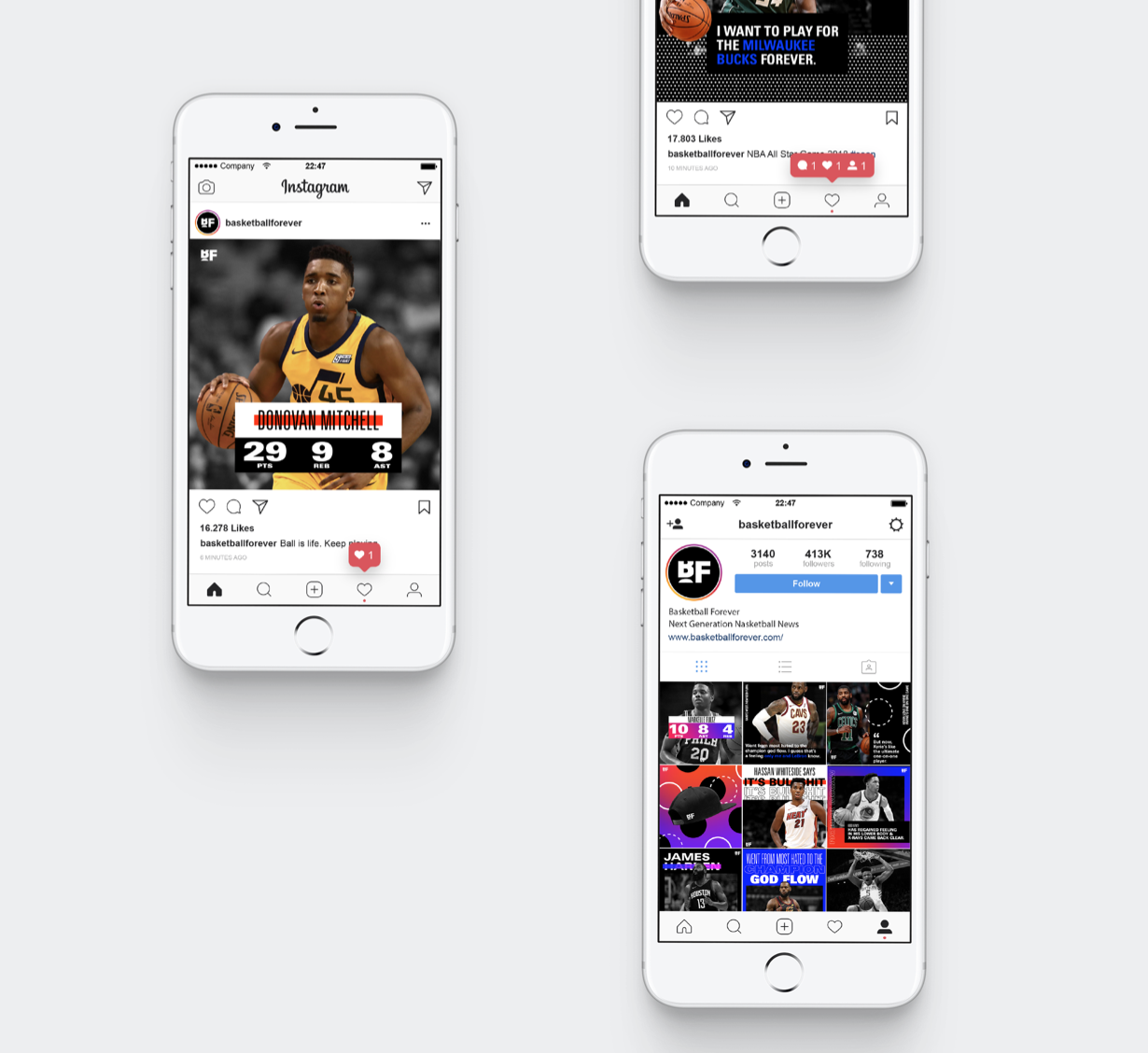 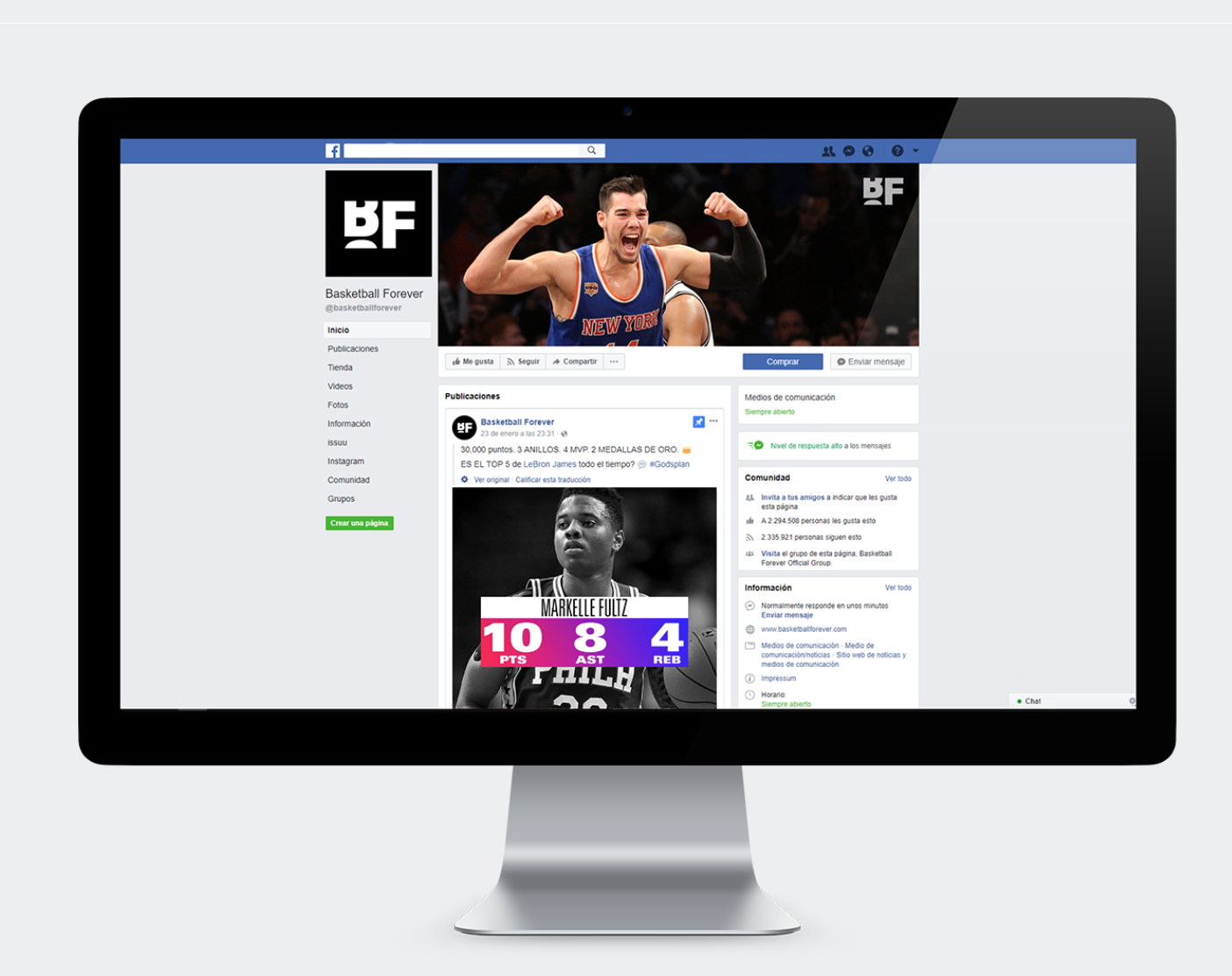 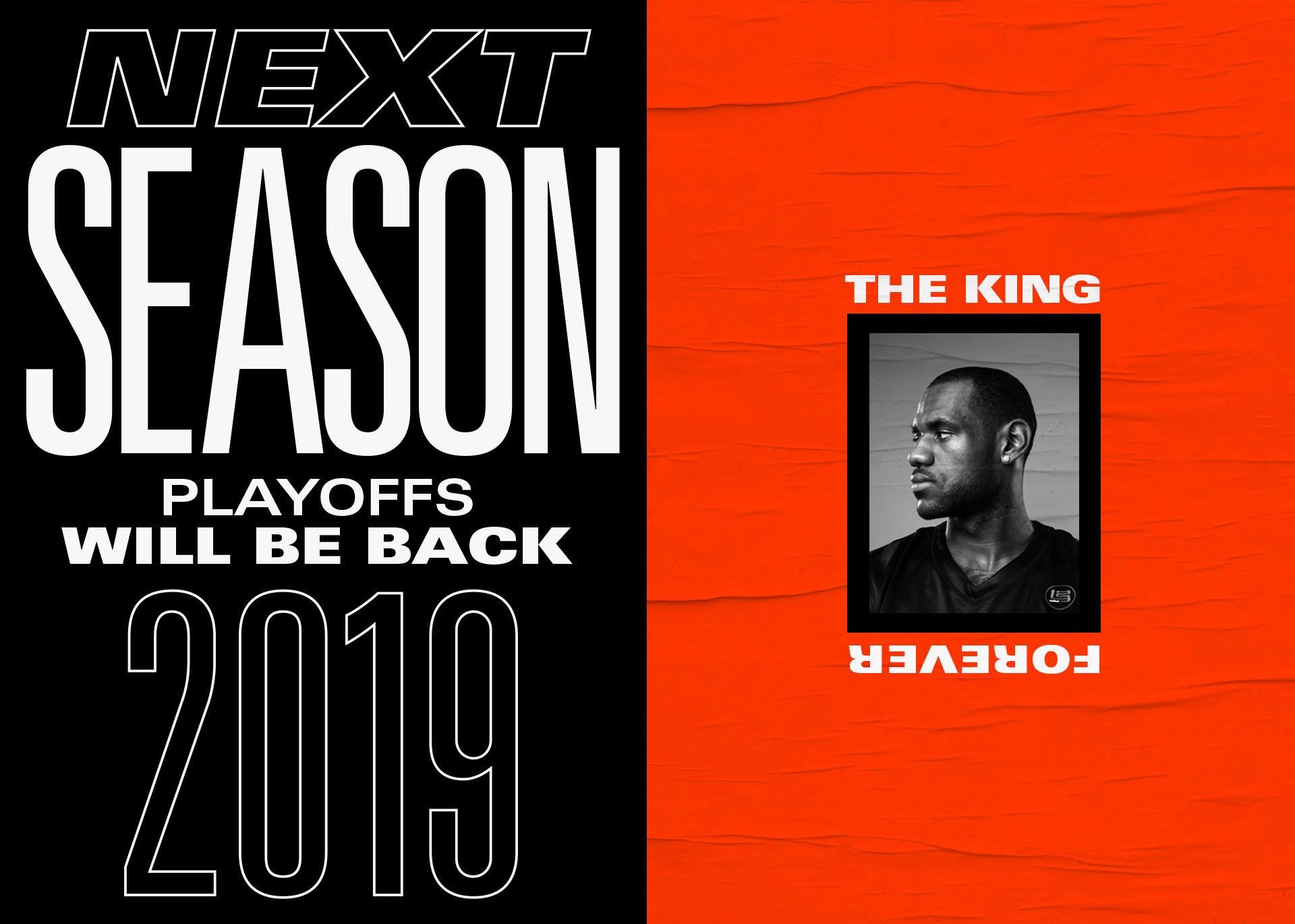 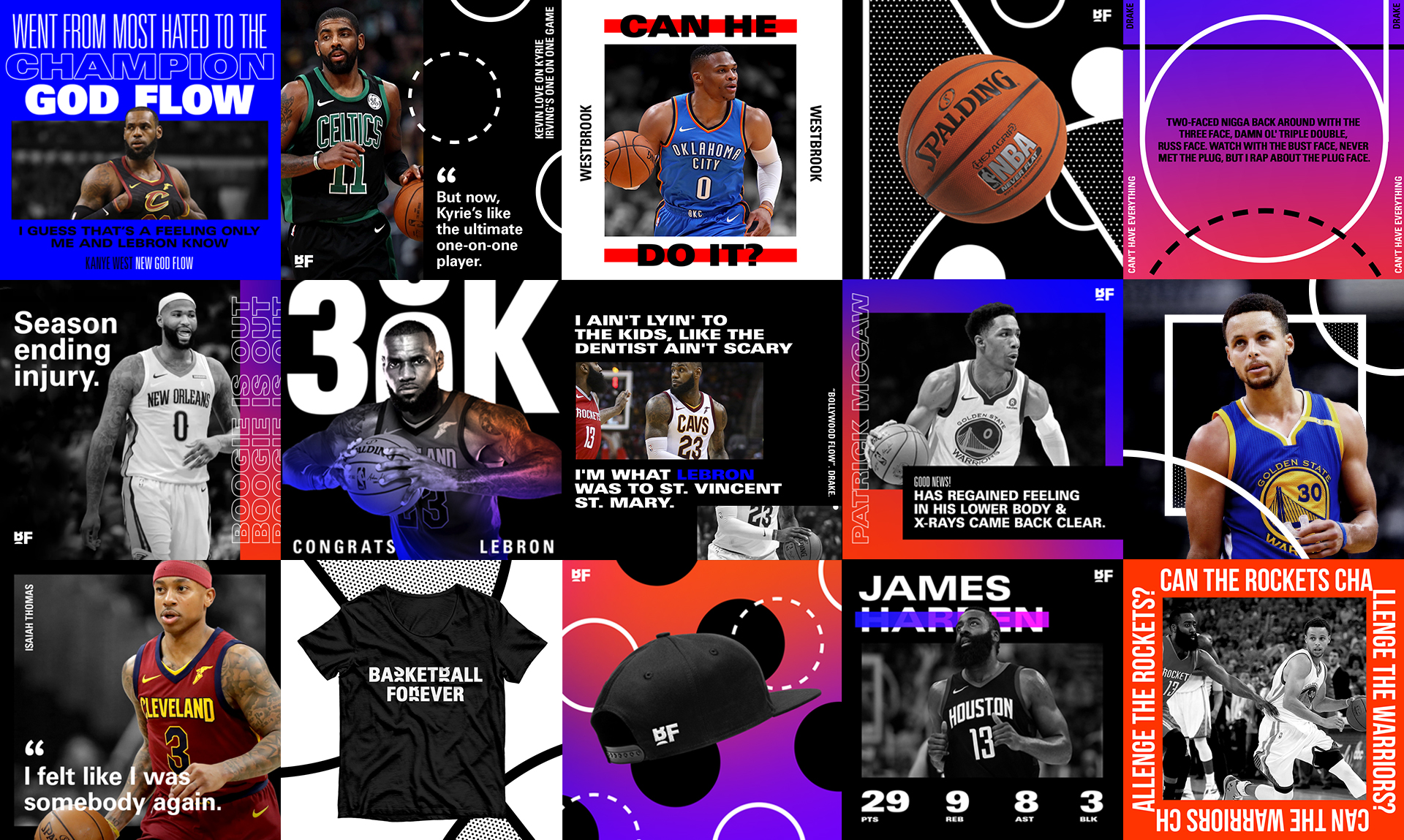 As a co-founder and creative director of Basketball Forever, a division of the Forever Network, I shaped the look and feel of the entire brand voice while defining the social strategy and bringing legitimacy to the brand within the social space. My contributions would lead to various levels of venture capital funding and brand deals that stood on the shoulders of the visual language and design systems aimed at resonating with a young sports fan audience that were developed under my watch. Growing the brand from a few hundred followers to millions across various platforms while building a design language that worked and a brand voice that would evolve over time was a difficult but fun challenge.

As a brand targeted at a younger demographic, our main goal in rebranding Basketball Forever was building a bold and eye catching visual language that spoke to the nature of the sport and the infinite concept of the word “forever.” Working to develop the creative direction with a team of designers we focused on graphic elements we could relate to the game: the dots of the ball, the lines, lights and colors in the court. Then to capture the concept of “forever” as a visual metaphor we came up with the idea of continuing, never-stopping, repeating elements that played with gradients and clean sans serif typography composed to make a statement. We wanted our consumers to feel the love of the game at every touchpoint with the brand. People are always searching for their tribe, and we wanted to provide a space where they could consume engaging content with like minded fans through content that spoke directly to them.

The gradient functioned as a visual motif that ties together the minimal yet bold Universe typeface with the repeating lines and dot patterns we built into the system. The result was a flexible and strong design language that took risks and drew in users as they were going through their social feeds. Knowing how crowded the marketplace was, we wanted to develop something that would look good next to other pieces of content on an infinite scroll timeline. Standing out amongst the noise while still retaining that original attitude and voice that I had helped develop over the early years of Basketball Forever was of utmost importance. Organizational decay often occurs as a brand grows and the voice becomes diluted as the original founder's vision is handed off to other people. From a design perspective, I wanted to give the brand an ethos that would help diminish any of these effects by being brash and staying true to that original vision.

This visual exploration went hand in hand with the editorial voice, which espoused an authentic connection with the average basketball fan. We aimed to connect with them at their level by capturing the sentiment that being a fan of a player or a team gave them every day of the year. Unlike other players in the market, we focused on quick turn brash social strategies that targeted consumers at the edge of their second screen experience. We spoke to them in the moment and provided a content menu that allowed us to capitalize on the moments they weren’t actively watching games as well as during them.

Basketball Forever was built as a social-focused publisher that covers the intersection of sports and culture. The content strategy evolved to feature more and more rich content experiences. What began as a text and image focused social feed of quick to market content, evolved into a heavily focused video publisher and then made a transition to online and written editorialized content. I helped develop the overall voice of the brand through multiple iterative content experiments whether that was on platforms such as the original facebook page, or more real time coverage through our twitter account. This personalized and intimate voice resonated with our core demographic as Basketball Forever evolved to produce richer and more interactive content.

This evolution allowed new avenues of coverage and the development of distinct voices on different platforms. Twitter was a much more real time conversation, while platforms such a youtube provided a backdrop for a more dramatic and cinematic type of storytelling. For instance, the "Dear Basketball" Kobe Bryant tribute I directed and edited garnered over 2 million views and some media coverage. Similarly, my End of an Era series garnered heavy coverage across Reddit and other platforms as an appetite for the full series continued to grow. End of an Era was an instant sensation garnering over 6.9 Million cross platform views in just under 48 hours and rising up to number 3 on the youtube world trending page.

Overtime, through the expansion of our social channels and reach we made the decision to launch a web presence as well to capitalize on these ongoing conversations that we had spurred. By creating a website we were able to funnel our social audience into a walled garden allowing for a more curated experience for users. Traditionally most media companies would do the inverse approach where their editorial strategy would inform their social strategy, but by focusing on the wants and needs of our audience from a social standpoint, our editorial strategy was able to amplify existing voices and add fuel to the fire of the conversations going on at the moment. This allowed us to transfer the momentum we had on social to our owned and operated channels.

Our two unique points of differentiation in speed to market and authentic voice allowed us to develop a massive audience across different social channels. This included an extremely active facebook page with over 3 million followers, and a quickly growing instagram presence with nearly 800K followers. With such a large audience, the consumption rate of content would be extremely high, so we knew our design language had to be nimble and flexible enough to work across different pieces of content without feeling stale. This meant setting a high bar for visual content across the board, and our video strategy was at the center of this entire initiative. Some of our most successful projects featured a heavily curated storyline driven feature on a specific player. Below you will find a few examples of the type of videos that we built our audience on: